Some of you may know that I recently moved into a house. Whilst I am really excited to be in a house with my fiance, I absolutely DESPISED the inevitable hours packing before we got to enjoy our new home. I just have no motivation for it. However, I knew that I wanted a fresh start with this move so sorted through all of my makeup, it was quite a task! Some of it was to throw away, and some I am going to send to Give and Make Up. 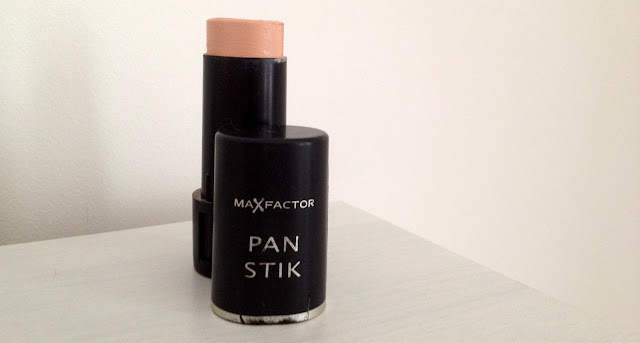 I couldn't help but giggle when I stumbled accross this Pan Stik from Max Factor. I had kept it for it's nostalgic memories of me actually using this on my face in my teen years after the only pale foundation I had found at pharmacy prices had been discontinued and a friend directed me to this.
Whilst the shade is too deep and pink for me, you've got to admire how rich and creamy this stuff is. The consistency and coverage feel like a concealer rather than a foundation to me as it is quite heavy and the way it is contained lends itself to be used as touch-up makeup, still, if you think about how long this product has been on sale for, you've got to admire how revolutionary it would have been.

A bit of history:
The PanStik was released commercially in the 1940's. Athough Max Factor died in 1938, he had pioneered theatrical makeup suitable for the modern progression in film-making by developing new formulas of greasepaint. His brother carried on the legacy and helped make the brand become successful and readily available rather than being restricted as theatrical makeup for the stars of the day.

Many modern foundations have taken the form of the Pan Stik, probably due to it's fuss free packaging, think of the Benefit Playstix, Bobbi Brown's Foundation Stick, and now Makeup Forever's very own Pan Stik, all of which are similar in their creaminess and coverage.


This (re)discovery of the Pan Stik lead me to a little online search which soon reignited my interest in vintage advertising (this may have also been prompted from watching a marathon session of Mad Men the night before).
I have always had an interest in this area and it made sense that I looked into buying a few to decorate the new house with. I found an absolute plethora on eBay for such decent prices! There's loads of choice online and brand images included Avon, Maybelline, Clinique, Mary Quant, Yardley and Coty amongst others so go and check them out if you're interested. If you want me to show you which ones I bought and where I put them just let me know and I'll do a post on that too!